Warsaw (where I was when I wrote this post) is supposed to have had a basilisk:

Also a friendly mermaid who is supposed to protect the city (although our guidebook cynically suggests that she hasn't been seen when needed most): 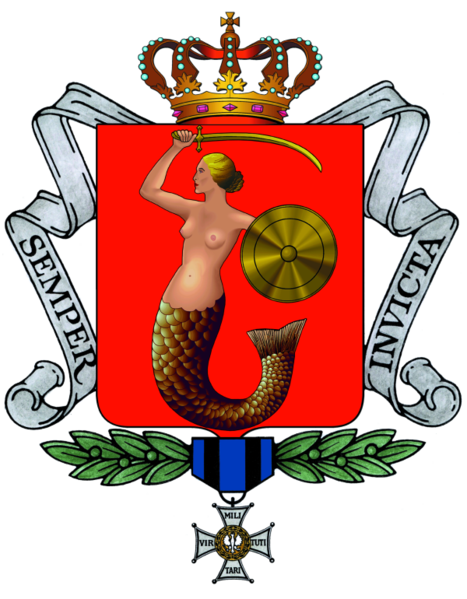 On the grand coat of arms shown above, she is accompanied by the motto semper invicta ("always undefeated").  However, this means something completely different for the Poles than it would for an imperialistic nation.

The entire city of Warsaw has been sacked and all but destroyed several times, most recently when Hitler destroyed their monuments and over 85% of the buildings, killing or exiling nearly all of the inhabitants, in vengeance for the Warsaw Uprising.  A city which had once had 1.3 million inhabitants was reduced to a population of 1000.

But the Varsovians just rebuilt as much as they could back exactly the way it used to be, so that it looks like an older European town even though almost all of it is actually post-WWII.  Even under communism, they did not lose their sense of identity.  It seems to be impossible to destroy a city that is loved this much.

As the Lord says through his prophet Isaiah,

"Afflicted city, lashed by storms and not comforted,
I will rebuild you with stones of turquoise,
your foundations with lapis lazuli.
I will make your battlements of rubies,
your gates of sparkling jewels,
and all your walls of precious stones.
All your children will be taught by the Lord,
and great will be their peace.
In righteousness you will be established:
Tyranny will be far from you;
you will have nothing to fear.
Terror will be far removed;
it will not come near you.
If anyone does attack you, it will not be my doing;
whoever attacks you will surrender to you." (54:11-15)

These words were written of Jerusalem, but it resonates with the plight of every other afflicted and storm-battered city in the world.  If there is even a single Pole in the New Jerusalem, nothing can prevent it from being rebuilt to be the New Warsaw as well!

I am a Lecturer in Theoretical Physics at the University of Cambridge. Before that, I read Great Books at St. John's College (Santa Fe), got my physics Ph.D. from U Maryland, and did my postdocs at UC Santa Barbara, the Institute for Advanced Study in Princeton, and Stanford. The views expressed on this blog are my own, and should not be attributed to any of these fine institutions.
View all posts by Aron Wall →
This entry was posted in History, Links. Bookmark the permalink.